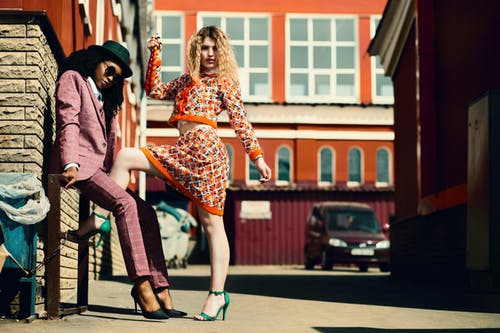 Prior to the influence of Britain and France, Tahitian fashion and dance was carried through the generations. Stories were told through beautiful and elaborate costumes and became an important part of the Tahitian fashion and dance traditions. The materials used in the costumes showcase their connection to the land and water. The materials used in Tahitian fashion were linked to the values and cultural heritage of the Polynesian people and linked to the folklore and beliefs. Many of the different islands and archipelagos around Polynesia would use different natural materials from around the natural environment. Some costumes might use local flowers and seeds with skirts made from grass materials whilst others may use coconut husks, pearls and clams. Many of these traditional dress styles and other traditions were banned for more than 130 years due to colonialism.

Nowadays many South Pacific Islanders are celebrating the cultural traditions and reviving old traditions. Polynesian fashion is emerging as an amazing blend of the old and the new which designed using the materials that were used in traditional costumes to create modern, stylish pieces.

Some designers have come out to say that being close to nature and isolated from other countries meant that they had to innovate in the past with unknown or barely used materials. Now they are using those materials for practical uses in modern style. Tahitian fashion is using materials like pearls and claims, seeds and leave and other material like coconut husks to create impressive designs such as corsets and bustiers. Polynesia has a vibrant Tahitian fashion scene and many of the designs are stylish and vibrant. Some of the designers have said that their traditional dance and dress styles were in the past considered obscene with much of the dislike targeted at women. Now designers are trying to positively highlight their culture and style. Many of the designers are very passionate about their unique culture and style; their designs are infused with their passion for their country.

In addition to grasses and seeds, beautiful local perks are also a popular choice for many dress designs, as well as pupu shells that are famous in the area and come in orange, white, and yellow. Pupu shells are found within the island of Rivavae they are stunning and used to be cleaned by hand and used in traditional necklaces.

Traditional dress is supposed to bestow mana to the people that wear it and was supposed to have given the wearer power, prestige, wealth, and also were used in dances about love, freedom, and seduction. Costumes were often linked with stories, legends, ideas, or concepts which would be expressed through dance. The costumes were designed to help the dancers express movement and emotion. They were also bright and used colors to express meaning, ura a red birds feathers were used to show royalty whilst yellow was used to represent sun and the colour of life, also known as ora. Colors were also taken from plants or tinted by natural seeds from plants around Polynesia. Before Europeans landed in Polynesia the islands were used for social, religious and political means and contained many scared grounds that could only be accessed by royalty and priests. Certain religious ceremonies could be practiced on those sites. When Europeans landed they prohibited much of the Polynesian way of life including their dance, dress and tattoos which they viewed as ungodly and unnatural. Luckily culture is recovering from colonialism and marching forward with designers innovating with natural elements and designs based on their traditional dress and costume with a modern twist.